Carnitine Core doesn’t just help support burning fat, it helps turn it into energy, giving your body an awesome energy source when you need it most.* With increased metabolism, you can burn even more fat, turning that fat into energy and increasing your performance in the gym.* Added Raspberry Ketones support the energy boost, giving you the edge you need and putting you closer to the results you’re after.* In addition combining ingredients like l-carnitine and Raspberry Ketones work synergistically from a weight management perspective, and may help promote lipolysis – converting stored fat to fatty acids and fat oxidation – and the burning of those fatty acids.

A naturally-occurring amino acid which plays a vital role in the metabolism of fat.* It can help promote good health and energy levels and may help support the release of stored body fat, called triglycerides, into the bloodstream to be used as energy.* L-Carnitine has also been suggested to support increased peak power, as well as helping to reduce lactic acid build-up in the muscles.*

The ester form of L-Carnitine, which is a naturally occurring amino acid metabolized from Lysine and Methionine.

Quickly becoming a very hot supplement these days, and what is so amazing about LCLT is its versatility. LCLT has been suggested to support muscle gain and healthy body composition.*

An esterified carnitine that has clinically suggested potential health and exercise benefits such as increasing energy.*

HOW TO TAKE CARNITINE CORE

Shake well before each use. As a dietary supplement, take one (1) tablespoon or 1/2 oz. of Carnitine Core 1-3 times daily or as directed by a physician or licensed nutritionist. May also be mixed with your favorite juice or beverage. Refridgerate after opening. 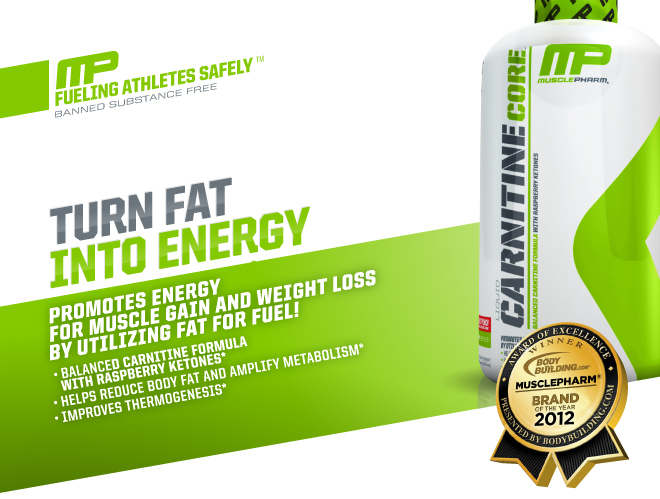